While the U.S. government has yet to say a word about the attack on Cuba’s embassy in Washington, more funds to attack Cuban medical collaboration were approved. Photo: AFP

Since January 1, 1959, countless terrorist actions have been planned, financed and executed against Cuba by U.S. special services and their mercenaries, who, on orders from the White House, have left a trail of horror and blood in their wake.

They have committed these attacks using a complete arsenal: armed infiltration, biological warfare, sabotage, planting of explosive devices, burning of schools and warehouses, kidnappings, including the non plus ultra of atrocity, the explosion of a civilian aircraft in mid-air.

Among the horrific pages of this ferocity, we remember the introduction of dengue hemorrhagic fever, a disease that left 150 victims, including 101 children. Introducing the virus was not enough: Cuba was denied access to a U.S. made chemical product and equipment to eliminate the vector spreading the disease, the Aedes aegypti mosquito.

In the 90s, the CIA introduced more than 30 explosive devices in Cuba, of which 11 exploded in tourist facilities; while outside the island, our embassies were targeted.

END_OF_DOCUMENT_TOKEN_TO_BE_REPLACED

Ankara.- The Anadolu Press Agency, the main one in Turkey, published today, under headlines, a full article which highlighted the various reasons why Cuba is in the best conditions to fight in many countries against COVID-19.

The work underscored the Cuban medical contribution to face the pandemic in Italy and in 20 other countries around the world; the great development of the health of Cuba thanks to the policies of its Socialist Revolution and its leader Fidel Castro and the evolution of the use of its advances against the new coronavirus in China and other countries. It also highlighted the offer of medical aid in the United States when the scourge of Hurricane Katrina, which, although it was rejected, had an experience of support against epidemics such as Ebola in Africa and cholera in Haiti or after earthquakes in several countries; and the award-winning work of more than 400,000 health specialists in 164 countries.

After commenting on the Cuban perspective regarding the criticism from the United States government against this cooperation, the article emphasized how the US blockade was maintained despite the pandemic and regardless of the various demands for its lifting. It echoed the statement of the Cuban Ministry of Foreign Relations of April 16, 2020, in particular its complaint about the negative effects of the blockade, since it hindered the acquisition of supplies and medical equipment by Cuba to combat the pandemic.

Following is the full text of the article.

Cuba better placed than many nations to fight pandemic.

END_OF_DOCUMENT_TOKEN_TO_BE_REPLACED

In the South Bronx, Dr. Melissa Barber battles COVID-19, putting into practice the lessons she learned in Cuba, at the Latin American School of Medicine

The United States has not been able to control COVID-19. The Donald Trump administration did not react in time, played down the reality, and as a result more than 34,000 people have died. Yet the government finds time to attack Cuba.

The U.S. blockade of Cuba, the longest in history anywhere, has been maintained and tightened to limit the Cuban health system’s access to essential inputs to confront the deadly SARS CoV-2. Nonetheless, medical education on the island has overcome the barriers that have been erected by successive U.S. administrations, and which Trump has set out to reinforce.

In New York, the epicenter of the disease in the country, Dr. Melissa Barber today puts into practice the lessons she learned in Cuba while studying at the Latin American School of Medicine (ELAM). In the South Bronx, she leads a team that organizes and makes available to the community supplies and resources to confront the disease.

END_OF_DOCUMENT_TOKEN_TO_BE_REPLACED

Ambet Yuson, General Secretary of the Building and Wood Workers’ International (BWI), condemned in Havana the US blockade against Cuba and expressed his solidarity with the people of the island.

Upon addressing the gender event: ‘Cuban women’s emancipation of opportunities, inclusion and social justice ?,’ the general secretary said that he came to Havana to express his commitment and solidarity with the National Union of Workers in the Construction and Similar Industries.

Yuson told exclusively Prensa Latina that the 15 million BWI members and its 380 unions in 130 countries fight and are in favor of ending the economic blockade imposed to Cuba by successive US administrations.

It meant that the members of the Building and Wood Workers’ International are opposed to this economic war because it is ‘violates human rights’ and is ‘against the workers’ rights.’

END_OF_DOCUMENT_TOKEN_TO_BE_REPLACED

President Miguel Diaz-Canel said on his Twitter account that neither threats nor sanctions nor pressure from the United States against Cuba ‘will prevent us from continuing to grow and progress by creating’.

The Cuban president noted on Saturday, at the meeting to review the work of the Ministry of Finance and Prices in 2019, that Washington ‘will continue to turn the screw and we will continue to resist, progress and win with emancipating and original solutions.’

As an example, he mentioned the efforts by the US to prevent, since last year, the arrival of oil in Cuba, and its financial persecution, which ‘we feel every day’.

We have worked with 50-60% of the usual amount of fuel, which has slowed down the country’s economic activity, Diaz-Canel stressed.

END_OF_DOCUMENT_TOKEN_TO_BE_REPLACED

U.S. Senator Bernie Sanders, a candidate for his party’s presidential nomination in November, praised the Cuban Revolution’s literacy program, a topic that made a stir on social networks today.

When Fidel Castro took office, do you know what he did? He had a massive literacy program. Is that bad,’ Sanders said, and it was replied back by users of the social network Twitter.

Sanders’ opinions, issued during an interview with the CBS television program 60 Minutes, refer to literacy, one of the programs that Fidel Castro presented in his argument The History Will Absolve Me, after the assault on the Moncada Barracks in 1953.

The senator made it clear that ‘his socialism’ is far from the social project of the Caribbean island with 60 years of experience and stressed that ‘it is unfair to simply say that everything is wrong.

END_OF_DOCUMENT_TOKEN_TO_BE_REPLACED

Cuban Foreign Minister, Bruno Rodriguez, said the hostile campaign against Cuba does not help Donald Trump, who seeks to be re elected this year in the upcoming presidential elections.

Trump obtained in 2016 the second worst result of Cuban votes in Florida among the Republican candidates. Hostility and measures to economically asphyxiate Cuba do not favor his election interests and affect Cubans heavily, wrote the diplomat on Twitter.

According to Rodriguez, the US president is badly advised by those who insist on the blockade against Cuba to raise his ratings.

Calculations made by the Cuban diplomatic mission to the United Nations confirm that nearly six decades of US blockade have caused damage for over 922.630 million dollars, but the human damage caused by the policy cannot be calculated.

END_OF_DOCUMENT_TOKEN_TO_BE_REPLACED 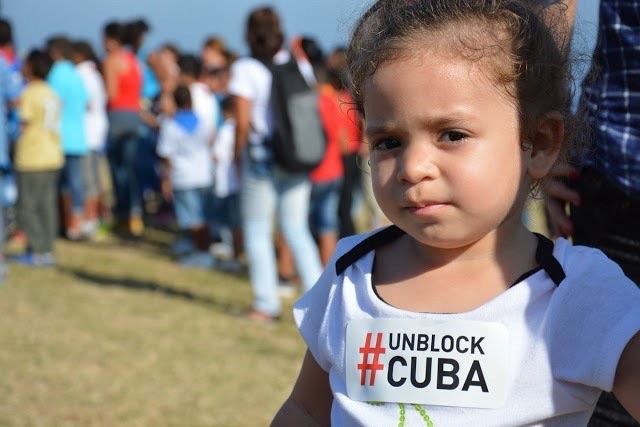 The US blockade against Cuba has a particular impact on the health and well-being of children and adolescents, Cuban Ambassador Oscar Leon denounced on Wednesday at the UN.

The damage caused by this blockade is not an invention; this mechanism inflicts immeasurable humanitarian damage and is a flagrant, massive and systematic violation of the human rights of the Cuban people, he stressed.

The blockade is an obstacle to the acquisition of technologies, raw materials, equipment, reagents and diagnostic tests, among others, he said in the adoption of the UNICEF Country Program Document for Cuba.

END_OF_DOCUMENT_TOKEN_TO_BE_REPLACED

A delegation of seven legislators from the U.S. state of Michigan is visiting Cuba today with a view to fostering cooperation relations of mutual benefit.

This is not a one-way conversation, we are also here to learn about Cuba and to talk about the possible trade in which the United States could buy tobacco, rum, tropical fruits and more, said James E. Byrum, outgoing president of the Michigan Agribusiness Association.

During a press conference with other senators and representatives of that northeastern state at Cuba’s National Hotel, Byrum called for an exchange in research to learn from each other on agricultural issues. I have visited the island several times, in times of ups and downs, but we always appreciate the reception we receive here, he added.

END_OF_DOCUMENT_TOKEN_TO_BE_REPLACED Cuban Foreign Affairs Minister Bruno Rodriguez today condemned the persistence of the U.S. blockade against his country, on the 57th anniversary of its official establishment.

‘Fifty-seven years after its imposition, the #USA blockade against #Cuba constitutes the most unjust, severe and prolonged system of unilateral coercive measures ever applied against any country,’ remarked the head of the Cuban diplomacy on his Twitter social network account @BrunoRguezP.

It’s genocidal. It violates the human rights of an entire people. It must stop, Rodriguez added on his tweet, accompanied by the hashtag #NoMoreBlockade.