After months of investigations by U.S. and Cuban authorities, there is no evidence that U.S. diplomats were the victims of “sonic attacks” in Cuba.

However, the case is being manipulated for political ends, to damage the Revolution’s image internationally, and as a justification to take unilateral measures directly impacting the Cuban people.

Since the story was first reported a series of inaccuracies and blatant lies have appeared in international media and official statements. Granma shares a list of the 10 most common:

END_OF_DOCUMENT_TOKEN_TO_BE_REPLACED

Cuba’s ambassador at UN headquarters in Geneva, Pedro Luis Pedroso, demanded in this Swiss city the cessation of the economic, commercial and financial blockade imposed by the United States, diplomatic sources informed today.

During the 37th regular session of the Human Rights Council, the diplomat also demanded the return of the territory illegally occupied by the U.S. naval base in Guantanamo province, according to a statement.

‘Cuba will continue its struggle because its society is as fair as possible. We will persist in defending the right of the Cuban people to give themselves the political system they consider, and follow self-determination without any interference,’ he said.

END_OF_DOCUMENT_TOKEN_TO_BE_REPLACED

Cuban scientists are debating the alleged sonic attack on US diplomats in Havana. Photo: Juventud Rebelde

Two Cuban doctors in physical sciences warned about the falsehood of the accusations by the United States about alleged sonic attacks perpetrated in this country on U.S. diplomats, local media reported today.

‘What they are publishing, the media, is full of falsehoods and ignorance from the viewpoint of physics, the doctor in physical sciences, Daniel Stolik Novygrod, a permanent professor at the University of Havana, categorically said in an interview with the newspaper Juventud Rebelde, published under the headline ‘The Irresistible Decibels of a Non-Existent ‘Sonic Attack».

That way, the scientist analyzes a situation in which a score of U.S. diplomats and their families attached to the U.S. Embassy in Cuba allegedly suffered or are suffering discomfort or medical symptoms caused by what they have called ‘sonic attacks’, the newspaper said.

For his part, the doctor in physical sciences, Carlos Barceló, a permanent professor at the Hygiene, Epidemiology and Microbiology Institute, attached to the Ministry of Public Health of Cuba, recalled that foreign media have not described the physical sonic phenomenon, and noted that ‘an exchange of information would be necessary to learn about the origin, if it existed, although categorically, it is impossible.’

The two scientists explained that, in the particularities of sound physics, and its clear explanation, it is evident that neither in the room of the Capri Hotel in Havana nor in the diplomats’ residences such events could happen without being heard nearby.

END_OF_DOCUMENT_TOKEN_TO_BE_REPLACED

After talking with government authorities of this capital, the U.S. delegation will exchange views with representatives of the Ministry of Science, Technology and the Environment (Citma), the Ministry of Transport and the Center of Genetic Engineering and Biotechnology, among other Cuban institutions.

During a meeting in this capital with the legendary Cuban ballerina Alicia Alonso, the eve, the U.S. group advocated for normalization of relations among both nations.

This delegation arrives in Cuba after the U.S. government announced the decision of withdrawing ‘non essential’ diplomatic personnel and their families from their Embassy in the island, in response to alleged incidents affecting some of them.

END_OF_DOCUMENT_TOKEN_TO_BE_REPLACED

The Cuban report to the United Nations General Assembly on the U.S. economic and commercial barriers against the island dedicates one chapter to how they affect tourism, recall today experts.

Economists consider this Friday that the sector of travel is a basic support of the island’s development, which Washington pretends to slow up with those measures.

The resolution 71/5 of the General Assembly of the United Nations, titled Need to put an End to the Economic, Commercial and Financial Blockade imposed by the United States of America against Cuba will be presented to that instance in November and has world attention.

It is a report that pretends to show succinctly the harm done by the application of that policy between April 2016 to June, 2017.

Such document evidences how the economic, commercial and financial blockade imposed on Cuba is the most important obstacle to carry out the National Economic and Social Development Plan of the country.

END_OF_DOCUMENT_TOKEN_TO_BE_REPLACED

Statement by Bruno Rodríguez Parrilla, Minister of Foreign Affairs Of the Republic of Cuba, at the Seventy Second Session of the United Nations General Assembly. New York, September 22, 2017.

Allow me to reiterate to you Cuba’s support to your work at the helm of the United Nations and as a guarantor and advocate of international peace.

Heads of State and Government;

I would like to express my deep condolences to the relatives of the deceased and the victims of hurricanes Irma and Maria, as well as our disposition to increase our cooperation, to the extent of our modest possibilities, with the brother peoples and governments of Dominica and Antigua and Barbuda, small Caribbean islands which suffered a terrible devastation; with the Dominican Republic, Puerto Rico, Saint Martin, Sint Maarten, Virgin Islands and Anguilla.

I call upon the international community to give the highest priority to this situation and mobilize resources to assist the small Caribbean Island States and territories which have suffered such devastation.

We would like to convey Cuba’s warmest feelings of solidarity to the government and people of Mexico, particularly to the victims and their relatives, who were affected by both earthquakes, and reiterate to them our disposition to assist the population and support the recovery works with our modest efforts.

We also want to express our sorrow to the US people, as well as our heartfelt condolences to the relatives of the deceased and to all of the victims of hurricane Irma.

END_OF_DOCUMENT_TOKEN_TO_BE_REPLACED 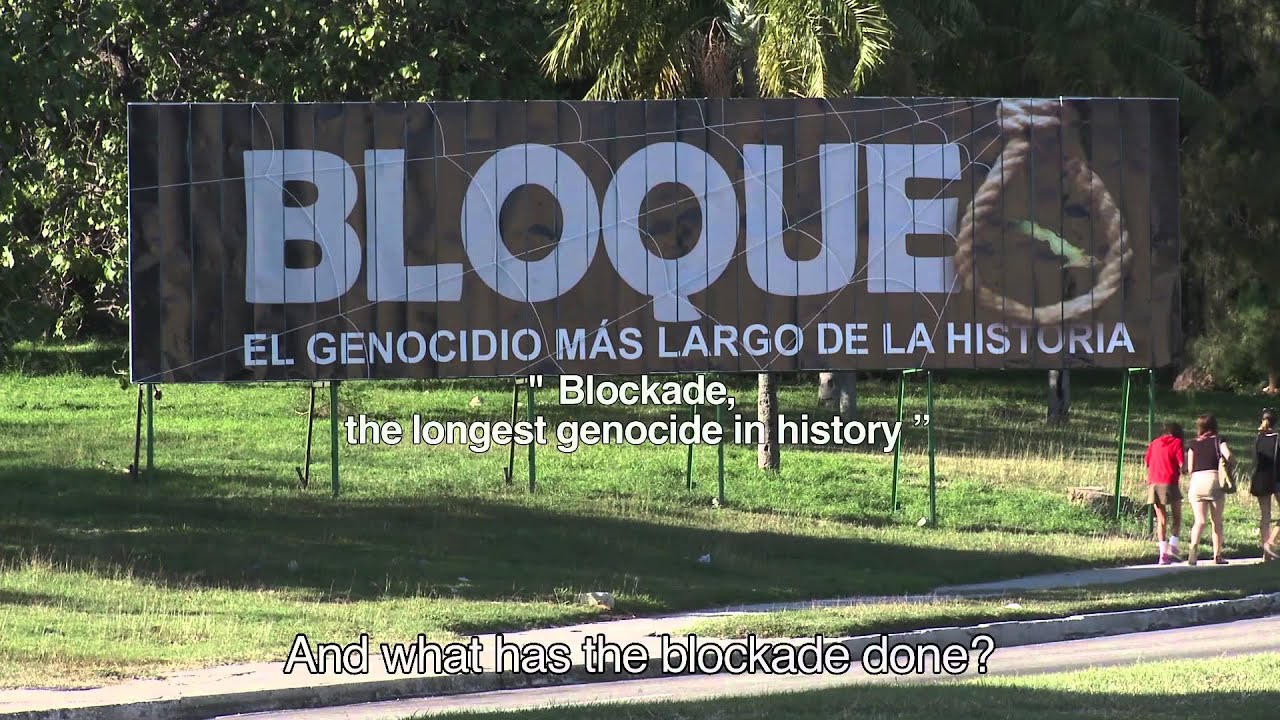 Latin American, Caribbean, African and Asian leaders have called for an end to the U.S. blockade against Cuba at the UN General Assembly, which is today holding its third day.

As in previous years, the group of Heads of State and Government of the main UN deliberative body welcomes leaders from several parts of the world who demand Washington to lift an economic, commercial and financial blockade in force for over half a century.

END_OF_DOCUMENT_TOKEN_TO_BE_REPLACED

Washington.- The coalition Engage Cuba welcomed today the presentation in the US Senate of a bill aimed at lifting the blockade of Cuba imposed by Washington more than 55 years ago.

The president of the coalition, James Williams celebrated that democratic Senator Ron Wyden had introduced the U.S.-Cuba Trade Act of 2017, which repeals outdated sanctions on Cuba and establishes normal trade relations with the island nation.

Williams, as member of a coalition in favor of ending the economic, trade and financial blockade, highlighted that six other members of the Democratic Party, Patrick Leahy, Dianne Feinstein, Richard Durbin, Tom Udall, Patty Murray and Jeff Merkley, cosponsored the bill.

END_OF_DOCUMENT_TOKEN_TO_BE_REPLACED

US Senator Patrick Leahy said on Tuesday that he will continue working hard in Congress to lift the restrictions imposed by the US against Cuba.

During an interview with Prensa Latina News Agency, the Democrat from Vermont who supports efforts in eliminating the travel ban, trade restrictions and elimination of the economic blockade against Cuba recalled that the majority of the people in the US want normal relations with Cuba.

We know that there will always be problems, nothing can change from one night to the other, but for the good of both peoples, we must have better ties between both countries, he said.

Leahy has traveled to Cuba several times, the last trip was last February when he and Republic Senator Thad Cochran headed a Congressional delegation to Cuba and met with President Raul Castro and other authorities.

The Vermont Senator reiterated that he will continue traveling to Cuba and fight for a better future for both countries.

END_OF_DOCUMENT_TOKEN_TO_BE_REPLACED

The International Relations Commission of the National Assembly of People’s Power fully supports the Revolutionary Government’s Statement issued June 16 on the policy directive that President Donald Trump has decided to apply in relation to Cuba.

The Commission welcomes the increasing expressions of respect and consideration for Cuba and the solidarity actions that have taken place in Latin America, the Caribbean and the world, in rejection of this policy setback; as well as the declarations in the United States by legislators, retired military personnel, academics, solidarity groups, businessmen, farmers, non-governmental and religious organizations, the media and representatives of the Cuban community, urging President Donald Trump to continue to advance in improving relations with our country.

President Trump, poorly advised and misinformed about the Cuban reality and the history of our relations with the United States, decided to return to past methods of a failed policy, which not only harms the Cuban people, but also the interests of large sectors of U.S. society, and satisfies only an increasingly isolated minority of Cuban origin.