President Miguel Diaz-Canel said on his Twitter account that neither threats nor sanctions nor pressure from the United States against Cuba ‘will prevent us from continuing to grow and progress by creating’.

The Cuban president noted on Saturday, at the meeting to review the work of the Ministry of Finance and Prices in 2019, that Washington ‘will continue to turn the screw and we will continue to resist, progress and win with emancipating and original solutions.’

As an example, he mentioned the efforts by the US to prevent, since last year, the arrival of oil in Cuba, and its financial persecution, which ‘we feel every day’.

We have worked with 50-60% of the usual amount of fuel, which has slowed down the country’s economic activity, Diaz-Canel stressed.

END_OF_DOCUMENT_TOKEN_TO_BE_REPLACED

Cuban Foreign Minister, Bruno Rodriguez, said the hostile campaign against Cuba does not help Donald Trump, who seeks to be re elected this year in the upcoming presidential elections.

Trump obtained in 2016 the second worst result of Cuban votes in Florida among the Republican candidates. Hostility and measures to economically asphyxiate Cuba do not favor his election interests and affect Cubans heavily, wrote the diplomat on Twitter.

According to Rodriguez, the US president is badly advised by those who insist on the blockade against Cuba to raise his ratings.

Calculations made by the Cuban diplomatic mission to the United Nations confirm that nearly six decades of US blockade have caused damage for over 922.630 million dollars, but the human damage caused by the policy cannot be calculated.

END_OF_DOCUMENT_TOKEN_TO_BE_REPLACED

A delegation of seven legislators from the U.S. state of Michigan is visiting Cuba today with a view to fostering cooperation relations of mutual benefit.

This is not a one-way conversation, we are also here to learn about Cuba and to talk about the possible trade in which the United States could buy tobacco, rum, tropical fruits and more, said James E. Byrum, outgoing president of the Michigan Agribusiness Association.

During a press conference with other senators and representatives of that northeastern state at Cuba’s National Hotel, Byrum called for an exchange in research to learn from each other on agricultural issues. I have visited the island several times, in times of ups and downs, but we always appreciate the reception we receive here, he added.

END_OF_DOCUMENT_TOKEN_TO_BE_REPLACED 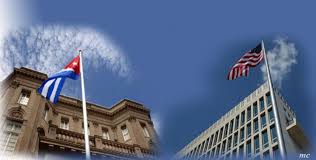 The relations between Cuba and the United States may have a better future, in which their differences are discussed with respect, said today the ambassador of the Caribbean island in this capital, José Ramón Cabañas.

According to the diplomat, the administration of the American president, Donald Trump, in power since January 20, 2017, is determined to destroy the achievements of the Cuban Revolution of more than 60 years.

However, we are still betting on a future that only belongs to our people, Cabañas stressed when he spoke last night in the celebration of the National Day of Cuba, which was set up by the embassy of that country in Washington.

He expressed that it is crazy to say that the current policy of the United States is aimed at supporting Cubans, when they try to deprive them of oil, gas, food, medicine and basic services.

END_OF_DOCUMENT_TOKEN_TO_BE_REPLACED

Relations between Cuba and the United States are ‘at a very low point’ as 2020 commences, according to the Foreign Ministry, due to the deterioration caused by the tightening of Washington’s hostile policy towards the island.

‘When the history of these days is written, we will need to reserve a chapter for the year 2019 because of the brutal, one could say demented way in which aggression against Cuba was escalated this year, practically at the rate of more than a sanction per week; that is, a ‘turn of the screw’ every seven days to asphyxiate our economy,’ President Miguel Diaz-Canel recently noted before the Cuban Parliament.

Carlos Fernandez de Cossio, general director for the United States at the Cuban Foreign Ministry, told reporters in December that there are powerful figures in the United States who want to break off all ties with Cuba and close the embassies in Havana and Washington.

The situation is similar to that on January 3, 1961, when the US Government announced it was breaking off diplomatic ties with Cuba, claiming alleged hostility from the victorious Revolution, after the first measures were taken to guarantee its sovereignty and self-determination.

END_OF_DOCUMENT_TOKEN_TO_BE_REPLACED

Statement by Bruno Rodríguez Parrilla, minister of Foreign Affairs of the Republic of Cuba, at the general debate of the seventy fourth session of the United Nations general assembly.

Heads of State and Government;

I would like to convey my sincere condolences to the Commonwealth of the Bahamas for the loss of lives and the terrible destruction caused by hurricane Dorian. I call upon the international community to mobilize resources in order to provide assistance to that country.

I want to denounce, before this General Assembly of the United Nations, that just a few months ago the US government has started to implement, criminal, non-conventional measures to prevent fuel shipments from arriving to our country from different markets, by resorting to threats and persecution against the companies that transport fuel, flag States, States of registration as well as shipping and insurance companies.

END_OF_DOCUMENT_TOKEN_TO_BE_REPLACED

Several democratic presidential hopefuls have expressed their interest in improving relations with Cuba, and have rejected the increased hostile policy implemented by Republican President Donald Trump.

Of the 20 and so political figures running for the presidential nomination of the Democratic Party for the 2020 elections, Senator Amy Klobuchar has been the most active in relation with Cuba, at times when the Trump administration has reversed the rapprochement initiated by previous president Barack Obama.

The Minnesota lawmaker reiterated her support for lifting the economic, commercial and financial blockade successive US administrations have maintained for almost 60 years, in statements she made last month to Prensa Latina.

END_OF_DOCUMENT_TOKEN_TO_BE_REPLACED

In times when the US Government keeps strengthening its hostile policy against Cuba, a US congressman visited Havana and stated that normal relations are possible for the two countries.

‘That’s what most of the US public thinks and representatives of congress too,’ democratic representative for Massachusetts James McGovern asserted during his recent visit to The Havana Reporter during a visit to Havana in late March.

McGovern, who is also the chairman of the House Rules Committee, said that he is aware of the fact that the administration of president Trump doesn’t share that opinion, as his hostile actions show. However, he said the administration’s vision lacks support in the United States.

Washington has imposed new sanctions on Cuba to exacerbate the economic, commercial and financial blockade in force for almost 60 years. Also threatening is the complete activation of Title III of the Helms-Burton Act, which seeks to prevent foreign investment in Cuba.

‘I, and many others, believe that the best option is to have good relations,’ he stressed.

END_OF_DOCUMENT_TOKEN_TO_BE_REPLACED

US Senators John Boozman and Michael Bennet submitted a draft bill to remove restrictions to private financing for US agricultural exports to Cuba.

The Agricultural Export Expansion Act (S.1447) aims to support producers from Arkansas, Colorado and the entire country by lifting restrictions that prevent using that kind of financing for agricultural exports to Cuba.

‘We’ve heard loud and clear that American farmers and ranchers want the opportunity to compete and sell their product around the world, including in the Cuban market,’ Bennet said in a communiqué.