Embacuba Zambia. The government of the United States has deployed, as from last year, an intensive and defamatory campaign against the medical cooperation offered by Cuba.

The campaign also include a program designed to fund actions and information searches to discredit and sabotage the international cooperation being provided by Cuba in the health area in dozens of countries for the benefit of millions of persons.  This is an endeavor added to the crude pressures exercised against a number of governments in order to obstruct Cuban cooperation.

Cuba is being accused of allegedly engaging in “modern slavery” and “trafficking” in persons working in Cuba’s health system for the purpose of exploitation or for being used to allegedly interfere in the internal affairs of the States they have been assigned to.

The US persecution started in Latin America and has forced the termination of cooperation programs in Brazil, Ecuador and Bolivia.

The persecution and search for information has also included the attempts by US “diplomats” to interrogate the Cuban staff at the very health centers where they work abroad, even in Northern Africa and the Middle East.

END_OF_DOCUMENT_TOKEN_TO_BE_REPLACED

To be well with the master of the North (United States), in Brazil they prohibit the sale of the best tobacco in the world of the Cuban brand Cohiba and invent gross lies to discredit it, the deputy foreign minister wrote in his Twitter account.

In another message on that social network, Sierra said that the high degree of servility and perversity of the Latin American right was ‘outrageous.’

The decision responds to an alleged supposed ‘excess of sorbic acid (natural organic compound used as a food preservative in the form of mineral salts)’ in the cigars notified by the National Health Surveillance Agency (Anvisa).

END_OF_DOCUMENT_TOKEN_TO_BE_REPLACED 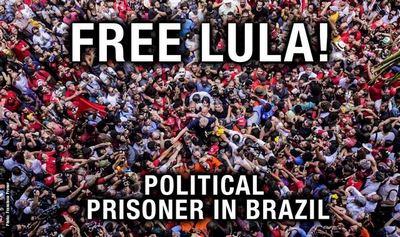 A manifesto signed by 464 Brazilian jurists calls for the release of former President Luiz Inacio Lula da Silva, who has been held as a political prisoner since April 7, 2018, after being sentenced on the second instance for passive corruption and money laundering without any evidence against him.

The document is addressed to the ministers of the Fifth Panel of the Superior Court of Justice (STJ), Felix Fischer, Jorge Mussi, Reynaldo Soares da Fonseca and Ribeiro Dantas. In the text, jurists point out that Lula is a victim of injustice and violence practiced by the state.

«Former President Lula, or any other Brazilian citizen, can only be convicted, losing his property and freedom, if the offense’s materiality is well-proven, the defense is largely guaranteed, and all the due-process rules are guaranteed. This did not happen in the case of Lula,» the jurists’ manifesto states and comments that he «lives in a cavalry not experienced by any Brazilian politician before.»

END_OF_DOCUMENT_TOKEN_TO_BE_REPLACED

From the fight against poverty to striving to end conflict, Lula’s policies have had a global reach, says former Brazilian foreign minister CELSO AMORIM

On April 13 2018, six days after president Lula’s arrest, Adolfo Perez Esquivel launched, through an online platform, the campaign for former Brazilian President Lula da Silva to be nominated for the Nobel Peace Prize.

A few weeks before, he had been with Lula at his namesake institute (Instituto Lula) and mentioned the idea.

I joined the Argentinian Human Rights activists on that visit, led by the jurist Carol Proner.

On that occasion, Esquivel based his proposal on Lula’s work to eliminate hunger in Brazil and the influence our Fome Zero programme had across the world, both by example and as concrete co-operation programmes in Latin America, the Caribbean and Africa.

The importance of Lula’s initiative did not go unnoticed by several world leaders. The French president Jacques Chirac joined our president in a global campaign to combat hunger and poverty, to which other heads of state joined, such as Ricardo Lagos from Chile, and Jose Luis Zapatero from Spain, besides the UN secretary-general Kofi Annan.

END_OF_DOCUMENT_TOKEN_TO_BE_REPLACED

Reception of the return to the homeland of the Cuban collaborators of the Mas Medicos Program. Photo: Ismael Batista

As faithful practitioners of revolutionary solidarity, more than 400 members of Cuba’s medical brigade in Brazil were welcomed at Havana’s José Martí International Airport during the dawn hours Sunday, returning on the 27th and 28th flights bringing Cuban doctors home, following the end of Cuba’s participation in the South American country’s More Doctors program.

Dr. Oralys García González speaking for the group on the second flight emphasized that the Cuban school of medicine teaches not only science, but humanism and internationalism as well, distinguishing Cuba doctors around the world.

“We return as reinforcements, to join the immense effort of our small island to perfect socialism and continue defending our conquests. Those of us who were part of the More Doctors program received a huge dose of love and joy, because we learned to be more doctors, more human, more solidary, and more Cuban,” she said.

END_OF_DOCUMENT_TOKEN_TO_BE_REPLACED

The Brazilian Commission of Human Rights and Deputies Chamber offered apologies this Friday to Cuban physicians for the questioning and disrespectful stance of president-elect Jair Bolsonaro.

He reaffirmed his gratitude to the doctors of the Island and offered apologies to the Cuban people which gave us highly-trained professionals who have contributed to our peoples’ health.

Couto hopes the Brazilian people will realize the damage caused by the former military and it is not a secret that Brazilian doctors ‘don’t want to work inland and in poorest areas’, where the communities experienced the quality and humanism of Cuban professionals.

END_OF_DOCUMENT_TOKEN_TO_BE_REPLACED

Dr. Rosa María Salazar Gutiérrez (second from left) with her family upon their return to Cuba. Photo: Ricardo López Hevia

A family of Cuban doctors, with much experience in internationalist medical collaboration, returns from Brazil

December 3, 2016, general practitioner Dr. Rosa María Salazar Gutiérrez left for Brazil as part of the Mais Médicos (More Doctors) program. She had undertaken three previous missions in Honduras, Venezuela and Guatemala. In total, she had 11 years of internationalist experience and a professional career spanning 32 years.

She was supposed to be visiting the island, alongside her family, for vacations this month, but the policy announced by President-elect Jair Bolsonaro made this a one-way trip. “We thought that something could happen if Bolsonaro won, but it was all very fast,” she noted.

Dr. Salazar traveled with her husband, also a doctor of the same specialty. They met on a mission in Guatemala before joining the More Doctors program. They were accompanied by their daughter and son-in-law, also doctors.

Rosa María Salazar reported that residents in the municipality of Embu das Artes, where they provided their services, were grateful to Cuban doctors, appreciating the way they explained every condition, how to treat diabetes and hypertension.

This family is an example of a duty fulfilled, medical professionals on the front line, and a case in point that confirms Comandante en Jefe Fidel Castro Ruz’s belief that “a better world is possible.”

END_OF_DOCUMENT_TOKEN_TO_BE_REPLACED

I would like to greet those who are connected to the YouTube channel of the Ministry of Foreign Affairs of Cuba to receive updated information about our country’s decision to discontinue its participation in the “More Doctors” program as well as further details about the return to Cuba of the health professionals who were working in Brazil or who are still in that nation.

As in former transmissions I remind you that this program is being broadcast live in Spanish and, once it concludes, it will be aired in Portuguese and English.

First of all I would like to reiterate that Cuba did not create the present situation. The decision adopted by our country not to continue participating in the “More Doctors” program was a painful but necessary decision, for it is Cuba’s responsibility and priority to ensure the physical integrity and personal safety of its cooperation workers wherever they might be, which is of vital importance in the present context in Brazil, characterized by uncertainty and the doubtful professionalism of the elected government.

The irresponsible attitude and the political manipulation of this issue by Jair Bolsonaro, the president-elect of Brazil, forced Cuba to take a decision that, most certainly, will affect millions of Brazilian families, particularly low-income families, who live in the poorest and faraway areas, in the communities with less resources, those who do not make headlines in the mainstream media and are hardly taken into account when it comes to political interests.

To those families and the Brazilian people we would like to express our full solidarity.

END_OF_DOCUMENT_TOKEN_TO_BE_REPLACED

About 40 years ago, in 1977, I was doing a piece in Africa, on the Mauritanian border, on the way to the Sahrawi Republic, and during one of the stops in a village next to a small oasis, I heard a group of people talking. At a spring in the village comparable to a Brazilian favela, I heard people who spoke Spanish and approached with my Arab guide. I saw that they were dressed in white and I asked them if they were doctors and they responded: “Yes, we are doctors, Cuban doctors.” I asked them: “How? What are you doing here?” And they answered: “We are working here in Africa, helping poor countries.”

It was the first time I saw Cuban doctors working around the world. Countries that are able to, pay for their services, those that can’t don’t. This is what is called proletarian internationalism. Thus I viewed the Brazilian government forcing Cuba to make that decision, a dignified attitude, an attitude that makes us proud to be friends of the Cuban Revolution, at the same time as it leaves us deeply saddened, because we know that it is the poor, scattered across thousands of towns in rural Brazil, who will pay the price; and that the polished and perfumed physicians who undertake costly courses in expensive faculties here in the Southeast, will never accept to set foot there.

END_OF_DOCUMENT_TOKEN_TO_BE_REPLACED

The hostility by Brazilian President-elect Jair Bolsonaro has left the most humble population in that country in a very sad situation, because they have been left without medical assistance, the Cuban collaborator Sonia Ponce said on Tuesday.

In statements to Prensa Latina upon arriving in Cuba, the specialist expressed outrage at Bolsonaro’s questions and threats, as a result of which the Cuban government decided to withdraw from the More Doctor Program that brought health care to the most vulnerable Brazilians.

‘We are professionals here and we were accredited in Brazil, for that we had to take specialized courses; that is, a new protocol that included thesis discussions, in which we all went well, I do not understand why Bolsonaro questioned our professionalism,’ Ponce noted.