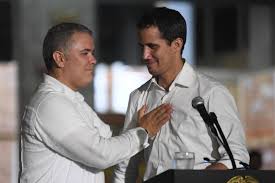 The Venezuelan Public Prosecutor’s Office (MP) started an investigation into the new attempted coup d’etat against the President of the country, Nicolas Maduro, announced Thursday the Attorney General of the Republic, Tarek William Saab.

In a press conference, the representative of the judiciary specified that the criminal investigations are against civilians and retired soldiers who were involved in the coup, which was scheduled June 23 and 24. ‘It is a subversive group led by Juan Guaido,’ he said.

Saab from the MP headquarters in Caracas, announced that the processes will have two lines: ‘the first will face the new criminal action outside the law that seeks to overthrow the Head of State, and another is the balance of the Commission for Justice, Truth, Peace and Public Tranquility.

‘Those mentioned were prequalified for the crimes of terrorism, conspiracy, frustrated homicide, treason and association to commit a crime,’ the MP’s highest authority stressed.

Saab recalled that the actions were disclosed on Wednesday by the Minister of Communication and Information, Jorge Rodriguez, who notified the intentions of a right-wing extremist group that attempted to assassinate Maduro, his wife Cilia Flores, and the President of the National Constituent Assembly, Diosdado Cabello.

In this regard, Saab said that the opposition has refused to political debate, or set the basis from the People’s Power in communities with ideas and projects. ‘They intend to spread chaos and anarchies seeking to keep public opinion in permanent attention,’ he concluded.